Barcelona, Spain, 8 November 2016 – Once again the stories behind the Rolex World Sailor of the Year Awards mark out sailing as a sport that encourages and rewards determination, precision and passion. It is never enough simply to possess talent, although there was plenty of that in clear evidence as the sailing world gathered in Barcelona to celebrate the achievements of some of its finest athletes; those individuals who have delivered outstanding performances throughout the past twelve months, all in the pursuit of excellence. 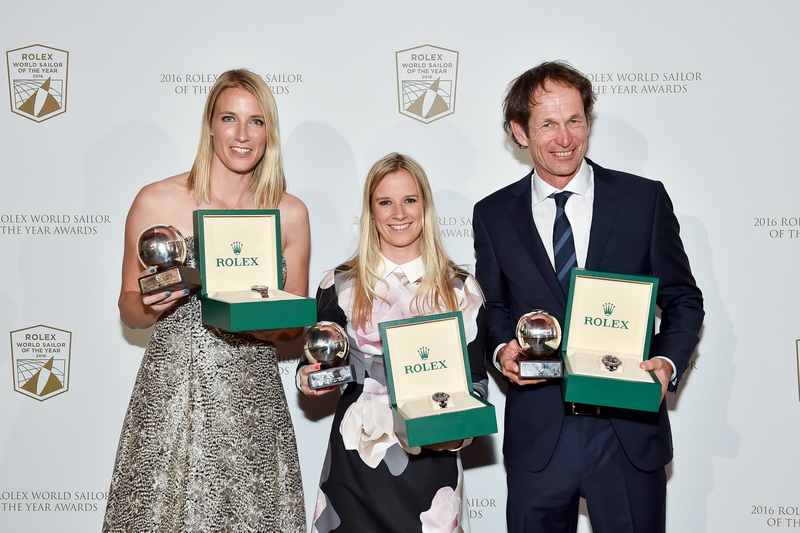 The winners of the 2016 Rolex World Sailors of the Year were announced at an impressive awards ceremony held at the 18th century Casa Llotja De Mar, in the presence of some 500 guests:

Santiago Lange provided Rio 2016 with the fairy tale storyline of the Olympic Games as he won gold with Cecilia Carranza Saroli in the Nacra 17. At 54-years-old, six-time Olympian and two-time bronze medal winner, Lange was the oldest sailor competing, but his story goes beyond his age. Just one year prior to the Games Lange was diagnosed with cancer and had to have a lung removed. Making the start line of the competition was an achievement in itself for the resilient Argentinean. Lange showed what is possible when passion is backed by courage and determination.

“This is a very emotional moment in a very long sailing career. It is a win for ‘us’ because I could not have done it without Ceciia. I want to thank all the other nominees, they are athletes I really admire. Only the very best win gold medals at the Games, and I have a lot of respect for all the other nominees.“

As reward for his achievement, Lange was recipient of a specially engraved Rolex Oyster Perpetual Yacht-Master 40 and a marble and silver trophy depicting the globe, crowned with five silver spinnakers representing the continents.

Spurred on by missing out on London 2012 gold in the 470 Class, Hannah Mills and Saskia Clark set about the Rio Games in determined fashion. They were near flawless in their build up. Gold at the 2015 Sailing World Cup Final, silver at the 2015 World Championships and two 2016 World Cup golds proved Mills and Clark were a force to be reckoned with. Once at Rio the British pair kept their focus on the task ahead. Only a disaster in the Medal Race could separate them from gold. That was never going to happen. Clark and Mills finished what they had started and wiped clean the disappointment of London. 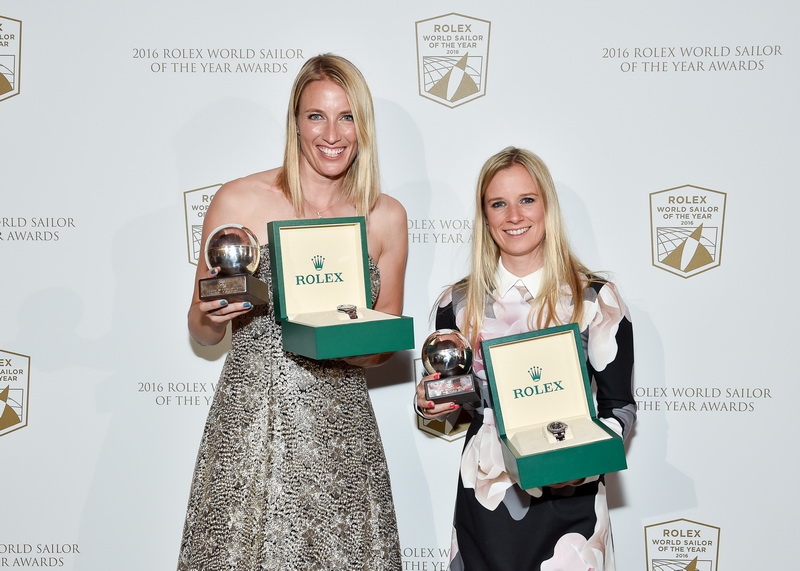 Saskia Clark commented afterwards: “It is totally overwhelming to win this award, to see the names of previous winners, the legends of sailing in the room with us. We really weren’t expecting this.” Hannah Mills was equally elated: “The whole basis of our campaign was teamwork, our bond. To cap our year with winning this award is absolutely incredible.”

Marking their triumph, Mills and Clark both received engraved Rolex Oyster Perpetual Yacht-Master 37s and the same marble and silver trophy as Lange.

At the beginning of the memorable evening, HM King Constantine, World Sailing President of Honour, remarked that these awards were “in recognition of an achievement that has been many years in the making. Every sailor on the nominee list has the ability to inspire the next generation and strengthen the legacy that our sport and every sport needs.”

The Rolex World Sailor of the Year Awards, sponsored by Rolex since 2001, are the most prestigious awards of recognition in the dynamic sport of sailing.

Since the awards inception in 1994, the trophy has proudly accumulated the names of those who have demonstrated unparalleled endurance, performance and accomplishment in sailing.

Competition for the 2016 Awards was truly remarkable, with five outstanding female and five equally exceptional male candidates short-listed from a field nominated by the public at large.

The eventual winners were determined by compiling votes from an online public ballot, the Member National Authorities and from guests present at the gala awards ceremony.

Founded in 1907, World Sailing’s vision is for a world in which millions more people fall in love with sailing; inspired by the unique relationship between sport, technology and the forces of nature; we all work to protect the waters of the world.

World Sailing is made up of 142 Member National Authorities, the national governing bodies for sailing around the world and 114 World Sailing Class Associations.